Feed the Ducks for Tuppence 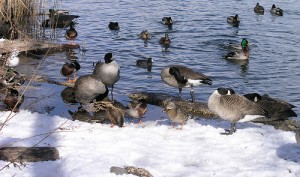 Ducks on the western shore of Prospect Park's lake

Feeding birds appropriately has been shown not only to be harmless, but can actually increase survivorship rates during extreme weather.

If you want to do right by our ducks, toss em some oats or popcorn. Or keep a bag of stale wheat & whole grain bread ends and rusks in your freezer.

While in small amounts, bread is not particularly harmful, especially in winter, keep in mind that Prospect Park gets over 7 million visits a year. The collective feeding of thousands of people, and I know that there are a handful of people who come every day, pose a major threat to the overall health of the Lake and the surrounding ecosystem. Overfeeding reduces oxygen levels in the water and encourages exotic pest species like Carp (in the Water) and Rats (on shore).

Also, the waterfowl experts say that you feed ducks and geese white bread, chips and the like, you are giving them food that is not good for them (junk food). A hunk of Wonder bread may fill up the belly of a medium-sized Canada goose, but they are empty calories. They need whole grains, corn, barley, and the like. In addition, I read that some cases of botchulism leading to dead ducks have been reported owing to spoiled yeast in baked goods.

I've contemplated offering appropriate duck food at the center, but I've been discouraged from doing so by the Park's natural resource manager, who is concerned that it will only encourage more people to feed the animals, which is technically against NYC Park regulations.

Thanks for keeping the park great!